Ballet in two acts.
Duration: 1 h 50 min, with one intermission.

Libretto: Sofia Gaidukova/Konstantin Matulevskiy
Based on the fairy tale by Charles Perrault. 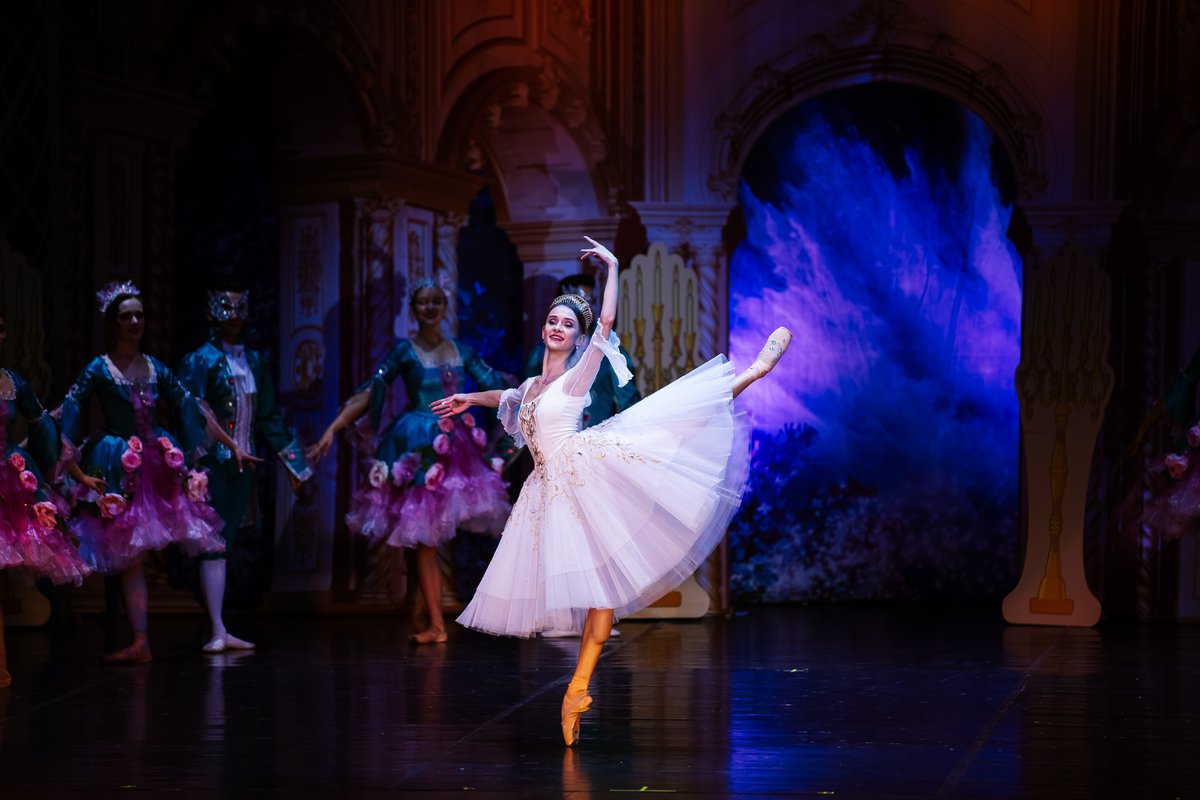 The first night of the ballet “Cinderella” by S. Prokofiev based on the same-name fairy tale by Charles Perrot was held on November 21, 1945 at the Bolshoi Theater. It is a play about the victory of childish, naive, humble purity over deceit, anger, greed of the surrounding society. The meekness and kindness of the poor stepdaughter deserve the highest reward. Dancers will help the viewer to believe, even for a moment, that this is possible. With the magic fairy dance, ridiculous absurdity of the sisters and stepmother, unusually beautiful romantic duets of Cinderella and the Prince, the play will be uplifting for both adults and children. 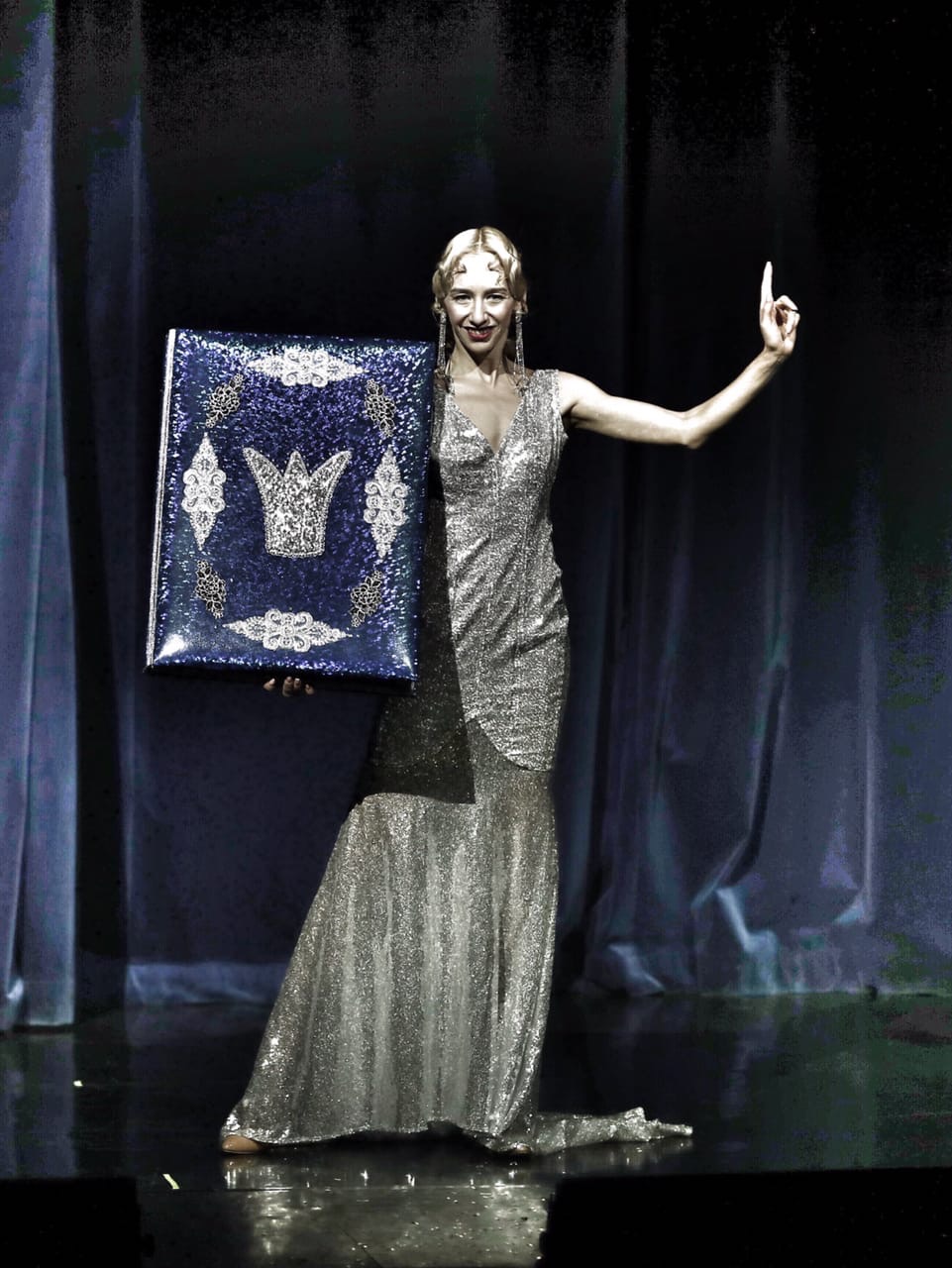 We are now going to open a book, children’s favorite book all over the world.

Once upon a time there is a King who lives in a magic kingdom. He loves dancing, so he often arranges balls in his palace. Unrecognized, without his crown, the King goes around his kingdom and teaches his people how to dance so that they do not feel embarrassed when they are at the ball in his palace. However no one ever manages to learn to dance as well as the King except for the Prince. His mother died when he was a child. He grew up as a beautiful young man, and he loves playing jokes at his people. 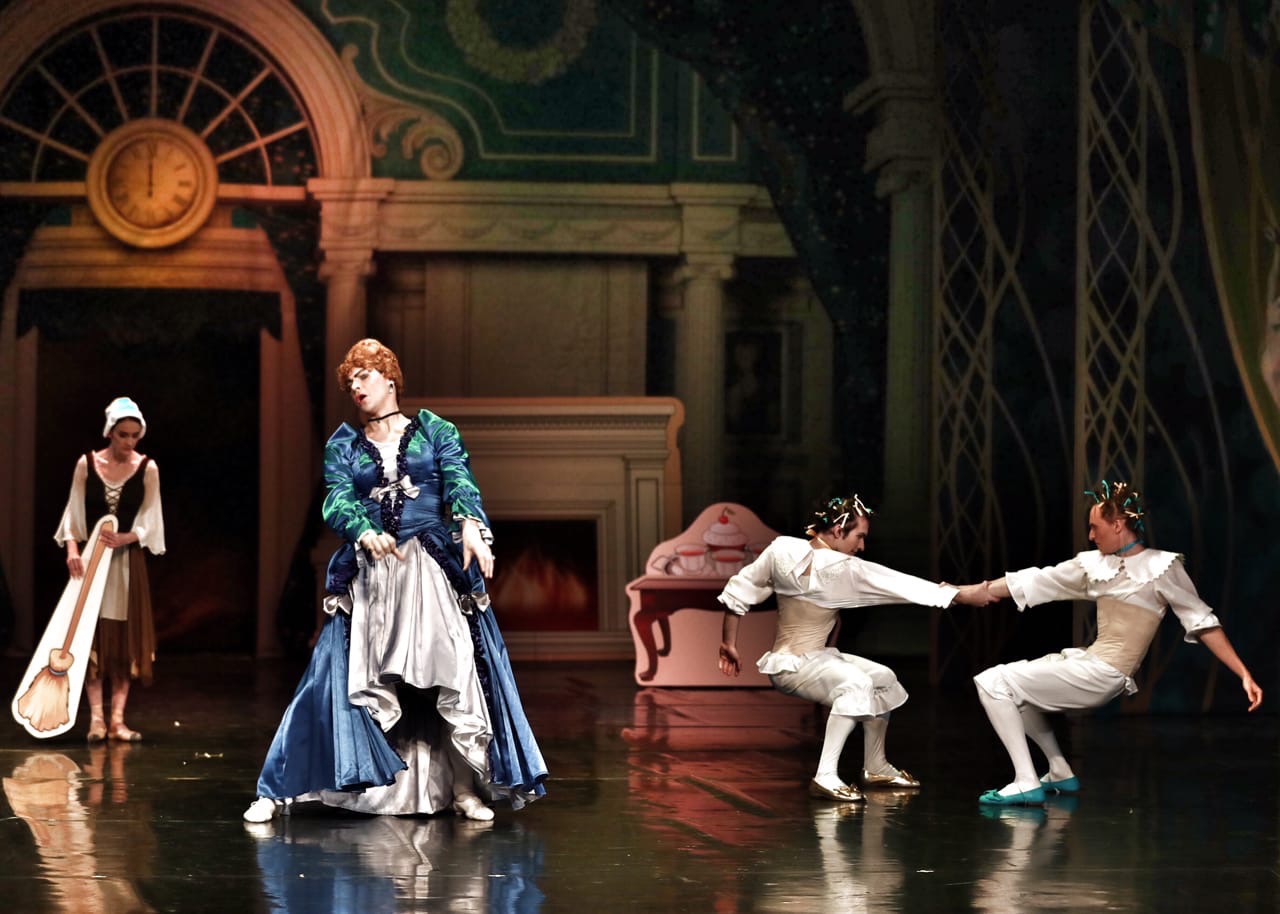 Once, when he is getting ready for another ball, the King goes to give a class in a house in the outskirts of the Kingdom. It is the house of The Stepmother and her daughters, and her step-daughter Cinderella. The Stepmother is a silly lady with huge self-conceit, who continually offends Cinderella and makes her do all the dirty work: cook, wash and iron the clothes, clean the chamber-pots. The ill-mannered Sisters follow their mother’s example and keep offending the poor girl who has no free time at all, while she loves dancing so much. When the King in disguise tries to teach the clumsy Stepmother and the Sisters to dance, Cinderella also starts repeating the movements in the corner next to the mantelpiece. She is very good, but she has no hope to get to the ball, because she has been given too much work to do. The dancing teacher sees the talent of the poor girl but he has urgent things to do. The stepmother and her daughters follow him. Cinderella is left alone. Suddenly Fairy Godmother appears in the room. She has been looking after her Goddaughter since her childhood and now it is time to engage in her destiny. Together with the fairies of the four seasons and star pages, the Fairy Godmother equips Cinderella to go to the ball. She turns a pumpkin into a carriage, she presents Cinderella with a wonderful dress and glass slippers. When they are parting, the Fairy tells her Goddaughter to be at home by midnight. At 12 o’clock the magic will disappear. However, it doesn’t disappoint Cinderella. She has a whole evening at the palace in store for her, where she will dance again and again. 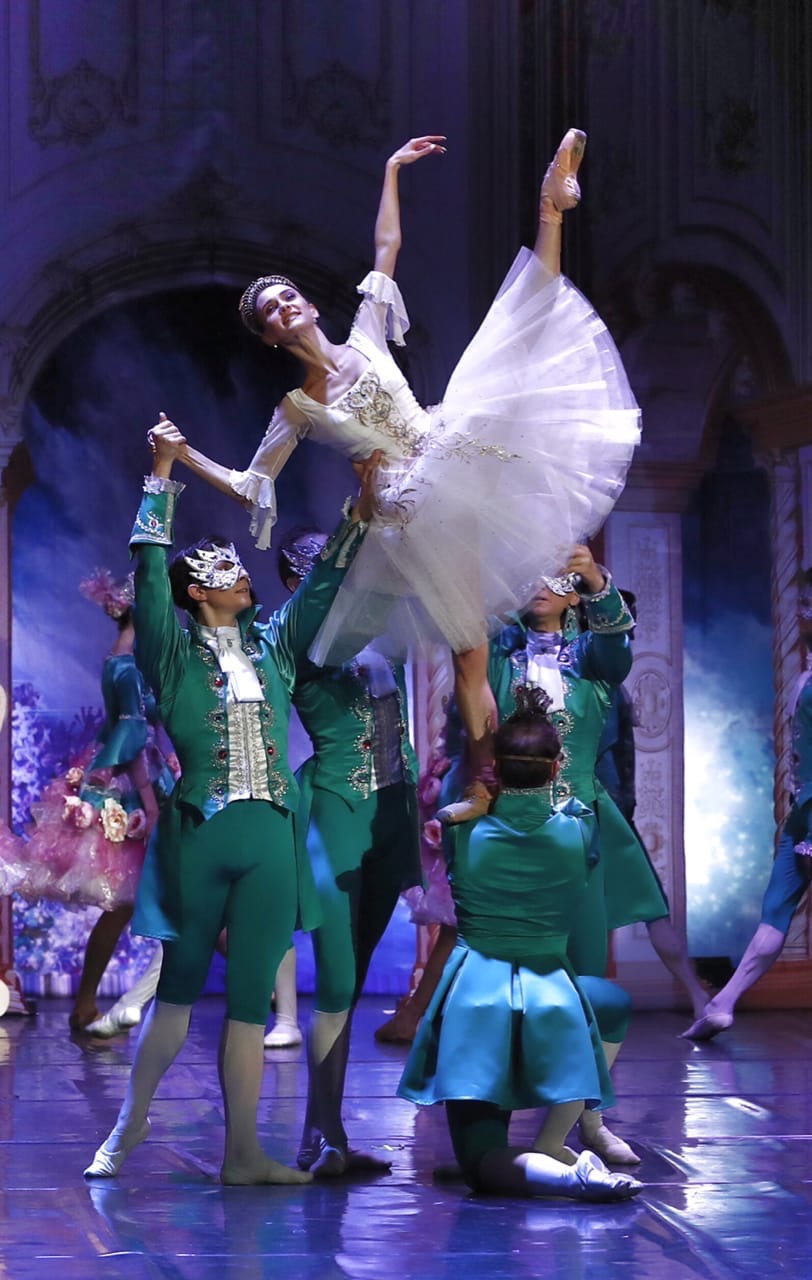 The ball is in full swing. The King presents his new dance to his people, and the Prince surprises everyone with grace and force. The not-so-noble lady and her daughters try to appeal to the Prince and the King 3 times. Suddenly a beautiful stranger appears in the middle of the ballroom. It is the transformed Cinderella. The Prince is charmed with her beauty, and the King is thrilled with the wonderful dance of the new guest. He engages Cinderella for a waltz again and again, but suddenly he notices that the Prince can’t keep his eyes off her. “Finally, my son is in love,” thinks the King and invites the people to go to another hall for a round of gavotte.

Cinderella and the Prince dance together forgetting the time, which has already passed. Cinderella hears the old watch of the Fairy Godmother strike repeating mercilessly, “It is twelve o’clock, midnight. Run, Cinderella! Magic is over!”

The guests hardly have time to raise glasses to toast the beginning of the new day, when Cinderella has already gone. Only a glass slipper she lost on her way is left lying in the middle of the ballroom. 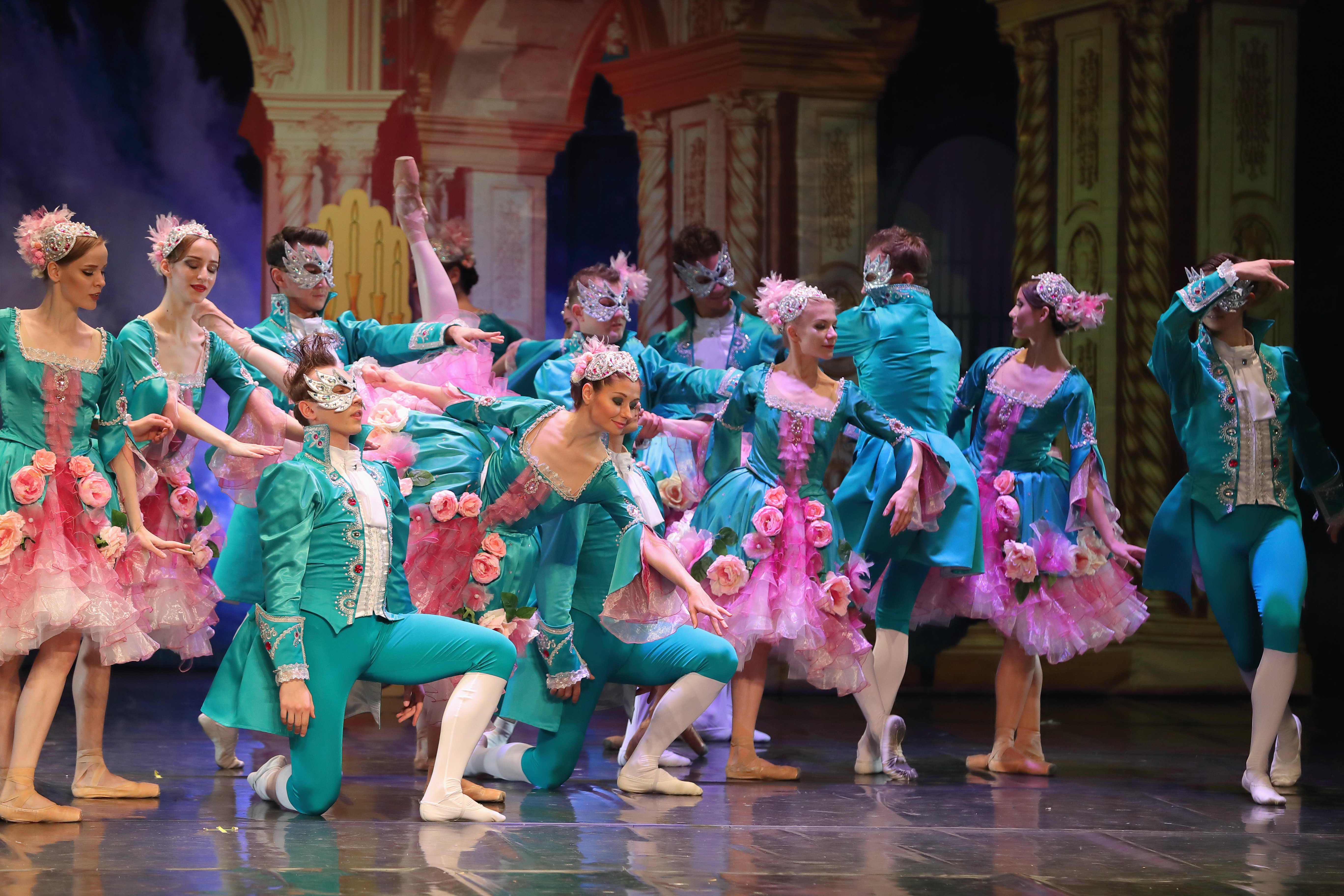 The Prince picks up the slipper carefully, and feels very sad. The active King arranges people to chase the wonderful stranger. “We will search all over the world, and we will find her”, he promised.

And the trip begins. So many countries do the King and the Prince visit! They go to hot Spain and formidable China, to the sunny East and cold Russia. A lot of girls try on the glass slipper, but it fits no one, and the Prince never finds his beloved stranger.

They almost lose all hope, when they come back to the magic kingdom. On the way to the palace the King and the Prince drop in to the house in the outskirts of the kingdom. The Stepmother and the Sisters try on the glass slipper, but it does not fit. The guests are about to leave, when the Fairy Godmother shows Cinderella to the King. She is dancing shyly in the corner recalling the ball. The King understands everything immediately, he realizes that Cinderella is the mysterious stranger.

The Prince and his people are very happy. The King arranges another ball in favor of the young couple. Everybody dances until they drop, and even the glass slippers crack. 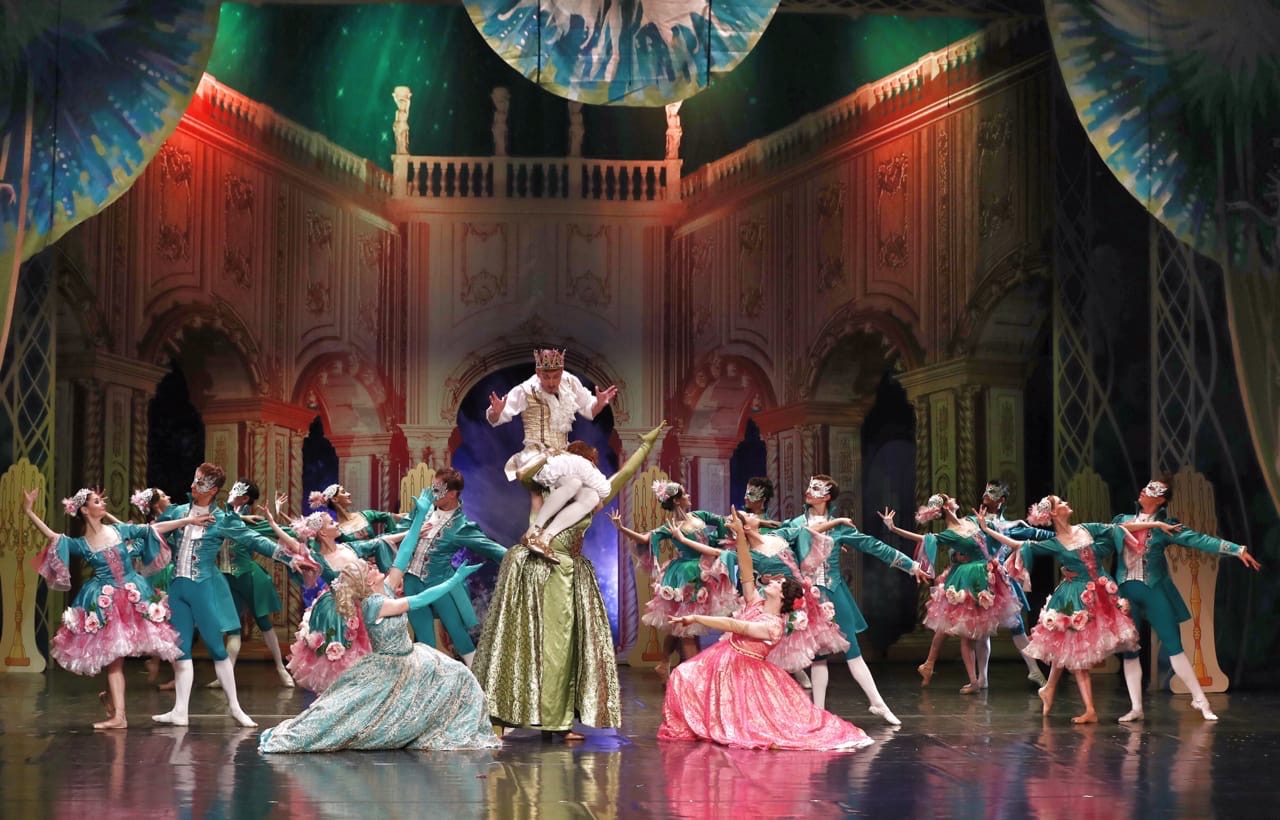