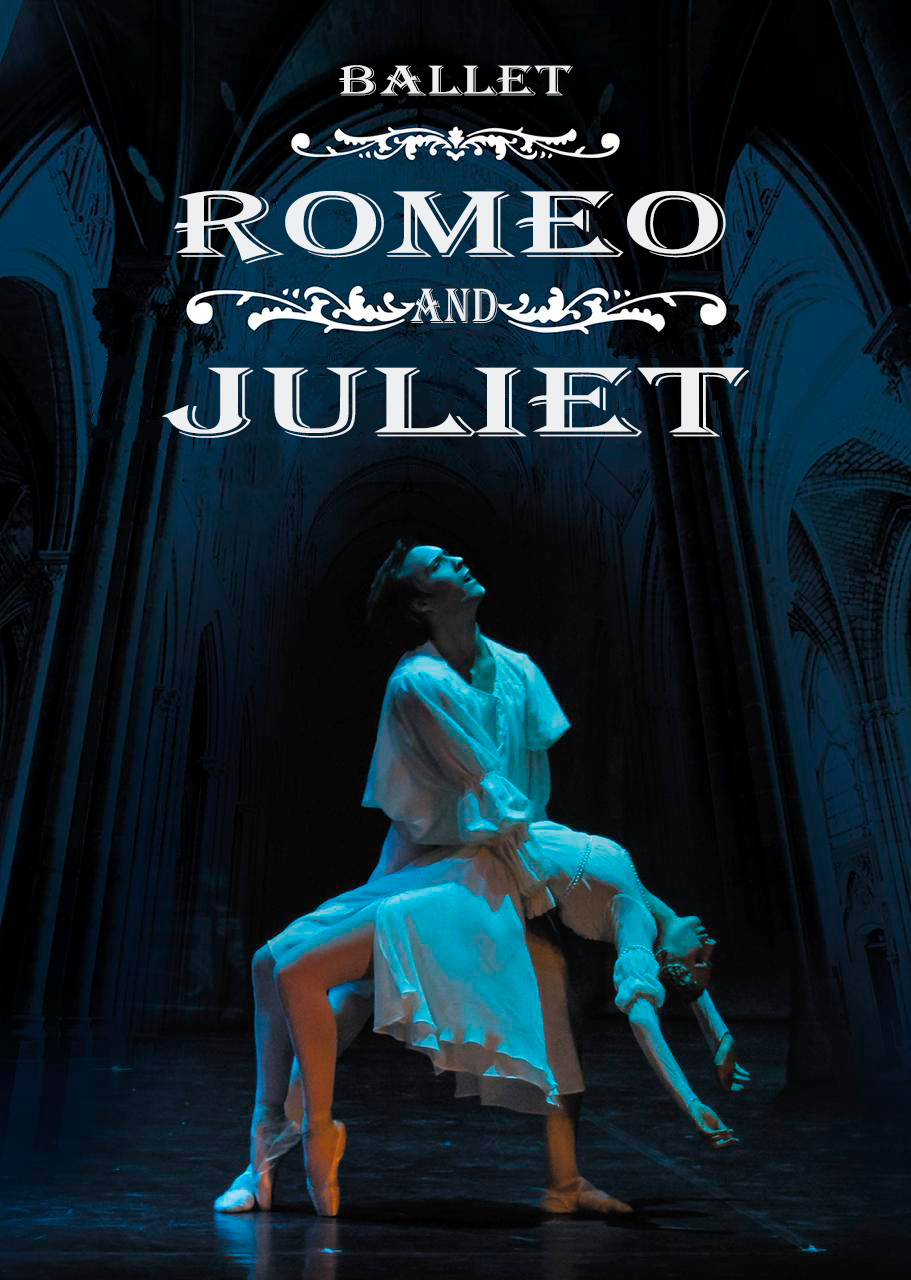 Ballet in two acts.
Duration: 2 h, with one intermission.

The first night of Romeo and Juliet by S. Prokofiev in an abbreviated version took place in 1938 in Brno. In 1940 the full version of the ballet was shown at the Kirov Theater. The part of Juliet was performed by the great Galina Ulanova. The show was a huge success and was awarded the Stalin Prize. Romeo and Juliet is one of the most popular ballets of the twentieth century. Joyful folk dances, the magnificent knights ball, breathtaking sword duels, romantic duos – scenes of life in Verona follow one another, taking the viewer into the world of Shakespeare’s tragedy. Death feud of clans, tyranny of parents and passionate love, which is more precious than life to both of them, all of this is expressed in music, in movements, in looks. In an era of medieval cruelty and total lack of freedom, the loving heroes are doomed to death, but their death brings the long-awaited peace.

In the middle of the orchestral overture the curtain opens, and the audience see a threefold triptych with Romeo on the right, Juliet on the left, and Laurence in the middle. Representatives of the feuding families crossed swords. Juliet’s room. The naughty girl teases her nurse, throws pillows at her, runs away from her, and the nurse lumbers trying to catch her. Juliet’s Mother interrupts the funny fuss. In a strict and dignified manner, she orders her daughter to stop the naughtiness, because Juliet is already a bride. Such a decent young man as Paris proposes to her. Juliet laughs in response. Then her Mother solemnly brings her daughter to the mirror. Juliet can make sure herself that she is quite mature.

A ball is announced in the palace of the Capulet. With funny jokes, Romeo and his two friends, Mercutio and Benvolio, go to the celebration arranged by the enemy family, wearing masks. Ceremonial Hall of the House of Capulet. Knights and ladies perform ceremonial dance. Juliet and her friends are at the ball with Paris. Guests ask Juliet to dance. She agrees. Juliet’s dance reveals her purity, charm and poetry. Romeo, who enters the hall, cannot take his eyes off her. Paris asks his bride to dance. Juliet humbly dances with him, but remains indifferent. Paris is not upset, he has fun with Juliet’s girlfriends. Mercutio puts on a hilarious mask and amuses the guests who laugh to tears. Taking advantage of the fact that the friend attracted everyone’s attention, Romeo approaches Juliet and tells her excitedly about the feeling that arose in him. The mask accidentally falls from Romeo’s face. Juliet is struck by the beauty and nobleness of the young man. Tybalt, an involuntary witness to this scene, recognizes Romeo. Mercutio rises to defend his friend. Swords are crossed. The master of the house stops the fight. Romeo puts on his mask and disappears. When the guests leave, the Nurse tells Juliet that Romeo belongs to the family of Montague. But nothing can stop the Romeo and Juliet.

They meet in the garden in the moonlit night. Romeo and Juliet are happy with their mutual feeling. 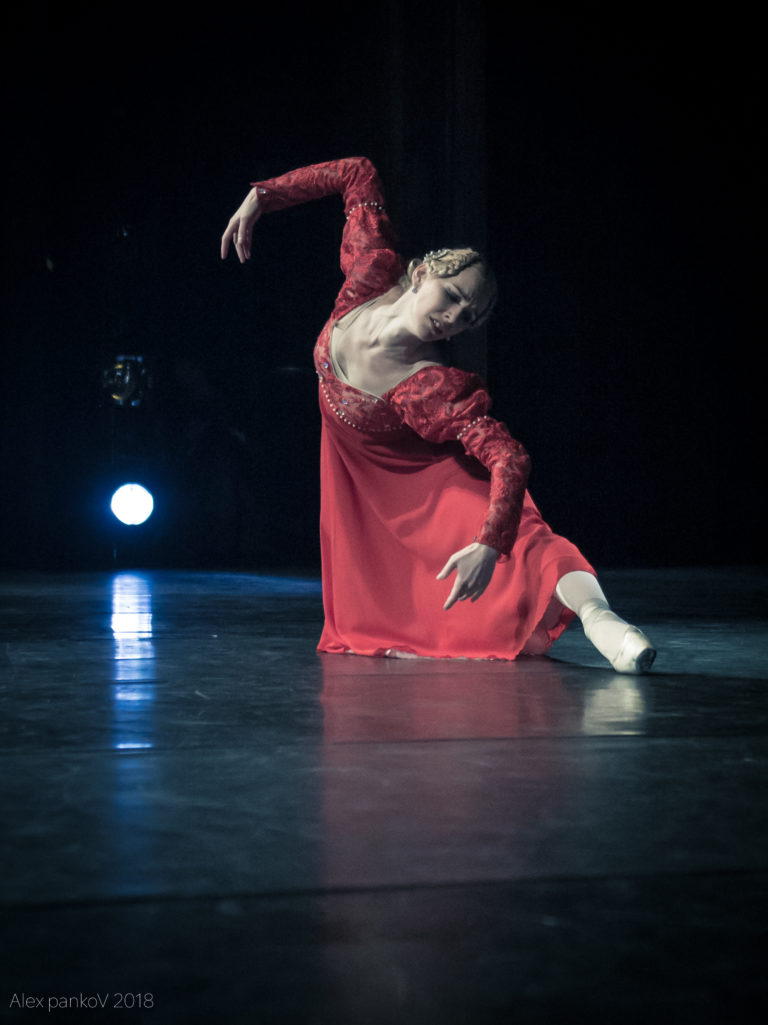 Unable to take even a brief separation from her beloved, Juliet sends Romeo a letter that her Nurse is supposed to pass to him. In search of Romeo Nurse finds herself in the middle of the carnival. Some mischievous children tease the Nurse, but she is busy looking for Romeo. She finds him and hands him the letter. Romeo reads Juliet’s message reverently. She agrees to become his wife.

Romeo comes to the cell of Friar Laurence. He tells Laurence about his love to Juliet, and asks to marry them. Touched by the purity and power of the feelings of Romeo and Juliet, Lorenzo agrees, hoping that this marriage will end the feud of the two families. When Juliet enters the cell, Lorenzo blesses their union.

The carnival rustles and glows on the squares of Verona. Among the merry citizens are Romeo ‘s friends, Mercutio and Benvolio. Seeing Mercutio, Tybalt starts a quarrel and challenges him to a duel. Romeo is on time to try and persuade the fighters to leave in peace, but Tybalt makes fun of Romeo, calling him a coward. A fight breaks out. Romeo tries to stop the fight, he draws Mercutio’s sword aside, but at this moment Tybalt inflicts a fatal blow to the opponent. Overcoming the pain, Mercutio tries to joke, dances, but his movements weaken, and he falls dead. Romeo is out of his mind with grief. To take revenge for his beloved friend, he starts a fight with Tybalt and kills him. Benvolio leads away Romeo, who must hide immediately. Juliet runs out of Capulet’s house and sees her murdered brother. Her mother and father appear. Lady Capulet cries over Tybalt’s body and calls for revenge. 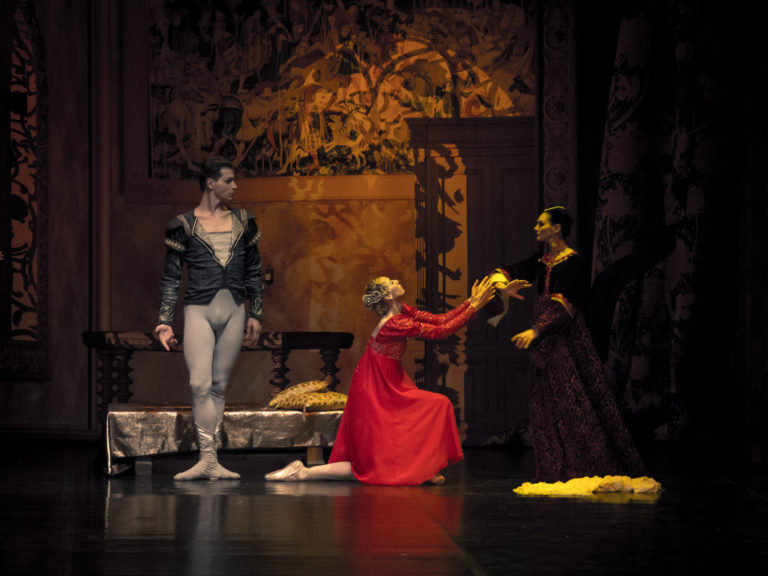 At night, Romeo secretly makes his way to Juliet’s room through the balcony to see his beloved before parting. Dawn is approaching. The lovers bid a long farewell. Romeo leaves.

Morning comes. The Nurse walks in, followed by Juliet’s parents. They announce that the day of her wedding with Paris is appointed. Juliet begs her mother and father to have mercy for her and not to force her to marry the unloved man, but her parents are firm. Her father raises a hand against the daughter.

Juliet resorts to Laurence in despair. He gives her a potion with which she will plunge into deep sleep resembling death. Romeo alone will know the truth. He will return for her and take her secretly out of the open crypt. Juliet is happy to accept the plan of Laurence.

Returning home and pretending to be submissive, she gives consent to marriage with Paris. Left alone, Juliet hesitates. She has visions of the murdered Mercutio and Tybalt. She decides to drink the potion.

Morning comes. Juliet’s friends come to her house to dress her up for the wedding. They find the bride dead. The news of Juliet’s death reaches Mantua, where Romeo fled. Grief-stricken, he hurries to Verona. The funeral procession is passing by. Juliet rests in an open coffin. The coffin is placed in a family burial vault. Everyone leaves. Night comes. Romeo runs into the cemetery. He lies down on the tomb, bids farewell to Juliet and drinks the poison.

Juliet wakes up. It takes her some time to regain consciousness and memory. When she sees herself in the cemetery, she remembers everything. Her eyes catch Romeo. She throws herself to him, but he is dead. There is not a drop in the bottle from the poison. Saying goodbye to the beloved, saying goodbye to life, Juliet stabs herself with Romeo’s dagger.

The elderly Montagues and Capulets come up to the tomb. They look at their dead children in horror. Then they stretch out their hands and swear in the name of life, in memory of the two beautiful beings, to end their feud forever. 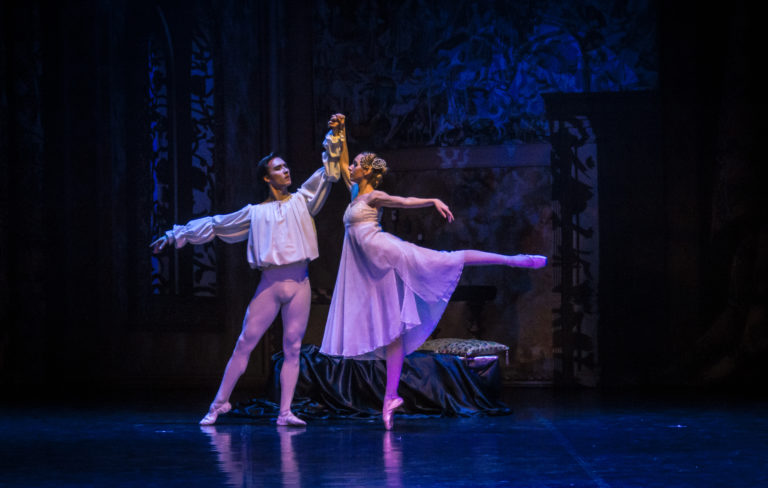