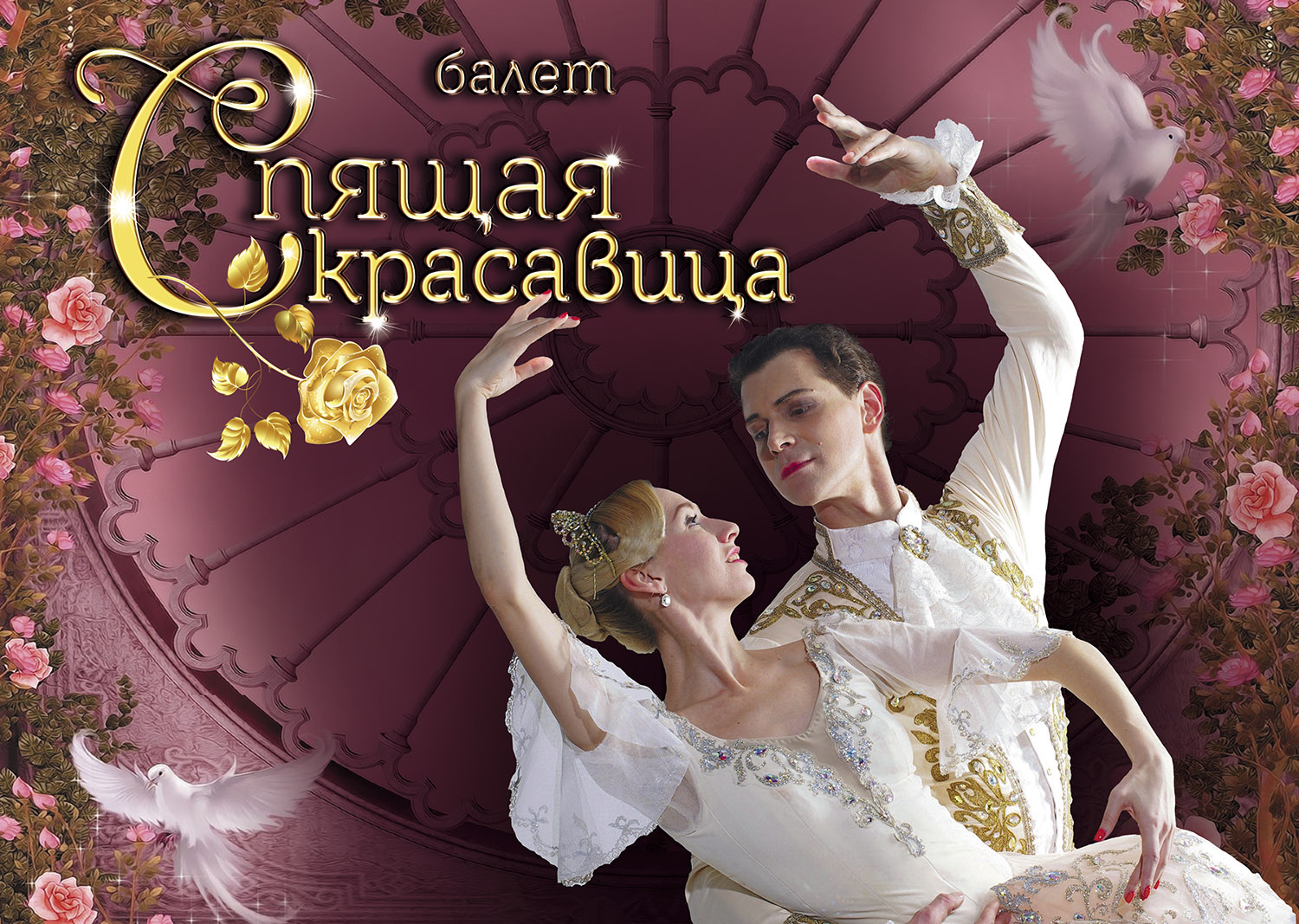 Ballet in two acts.
Duration: 2 hours 10 minutes with one intermission The first night of the Sleeping Beauty was in 1899 at the Mariinsky Theater. The staging of the tale of Charles Perrot by Marius Petipa was one of the most expensive productions of that time. It cost 42 thousand pre-revolutionary rubles (a quarter of the annual budget of theaters of St. Petersburg). The partnership of the brilliant French choreographer and the Russian composer brought to life a masterpiece of ballet art that has not lost its popularity for 120 years. The music of P.I. Tchaikovsky does not simply accompany the dance, it describes the inner world of each character, conveys the main conflict, the struggle of light and dark.

The Sleeping Beauty ballet is like a symphony, each act is a full-fledged independent work of art. The show is so vivid that you won’t notice the time fly by. The gilded palace, the blooming garden, dark woods – bright sets follow one another. All sorts of fairy tale characters, fairies, Puss in Boots, Little Red Riding Hood, Blue Bird, appear on stage. The spectacle is crowned with a big wedding adagio, glorifying the victory of love.

This ballet is a real gift for aesthetes who want to enjoy the beauty of the lines and the magic of classical dance. King Florestan the XIVth declares a grand christening ceremony to be held in honor of the birth of his daughter, Princess Aurora named after the dawn. An entourage of six fairies are invited to the Christening to be godmothers to the child. They are the Candide Fairy, the Coulante Fairy, the Miettes Fairy, the Canari Fairy, the Violente Fairy and—most importantly— the Lilac Fairy, who is the last to arrive. As the fairies are happily granting gifts of honesty, grace, prosperity, song and generosity, they are suddenly interrupted by the arrival of the wicked fairy Carabosse, who is furious at the King’s failure to invite her to the ceremony. The King and Queen begin to remonstrate, and the Master of Ceremonies, Catallabutte, intervenes to take responsibility, whereupon Carabosse rips off his wig, laughing. With spite and rage, Carabosse

declares her curse on Princess Aurora: she will prick her finger on her sixteenth birthday and die. But all is not lost: the Lilac Fairy, fortunately, has not yet granted her gift to the Princess. She acknowledges that Carabosse’s power is immense and she cannot completely reverse the curse. However, she declares, though the Princess shall indeed prick her finger, she will not die, but instead sleep for 100 years until she is awakened by the kiss of a prince. Carabosse departs, and the curtain falls as the good fairies surround the cradle. Aurora’s 16th birthday party. Brightly clad peasants  dance a waltz  with flower garlands. All await the arrival of the Princess Aurora. The princess appears and dancing like a carefree young girl. She is then ceremoniously introduced to the four princes who have come to seek her hand. Aurora does not stop at any of the suitors and continues to dance alone.

Her attention is suddenly distracted by a strange woman dressed in black who offers her an unfamiliar object. Before anyone can stop her, Aurora seizes the dreaded spindle. The unwary Princess pricks her finger, grows weaker, and falls to the floor in a swoon. Just as those assembled lapse into despair, the Lilac Fairy steps forward. Waving her wand soothingly, she reminds them that the Princess will only sleep and she casts everyone into deep slumber along with her. The Lilac Fairy summons a forest of thorns, thickets, and enormous shrubbery to grow around the sleeping court. 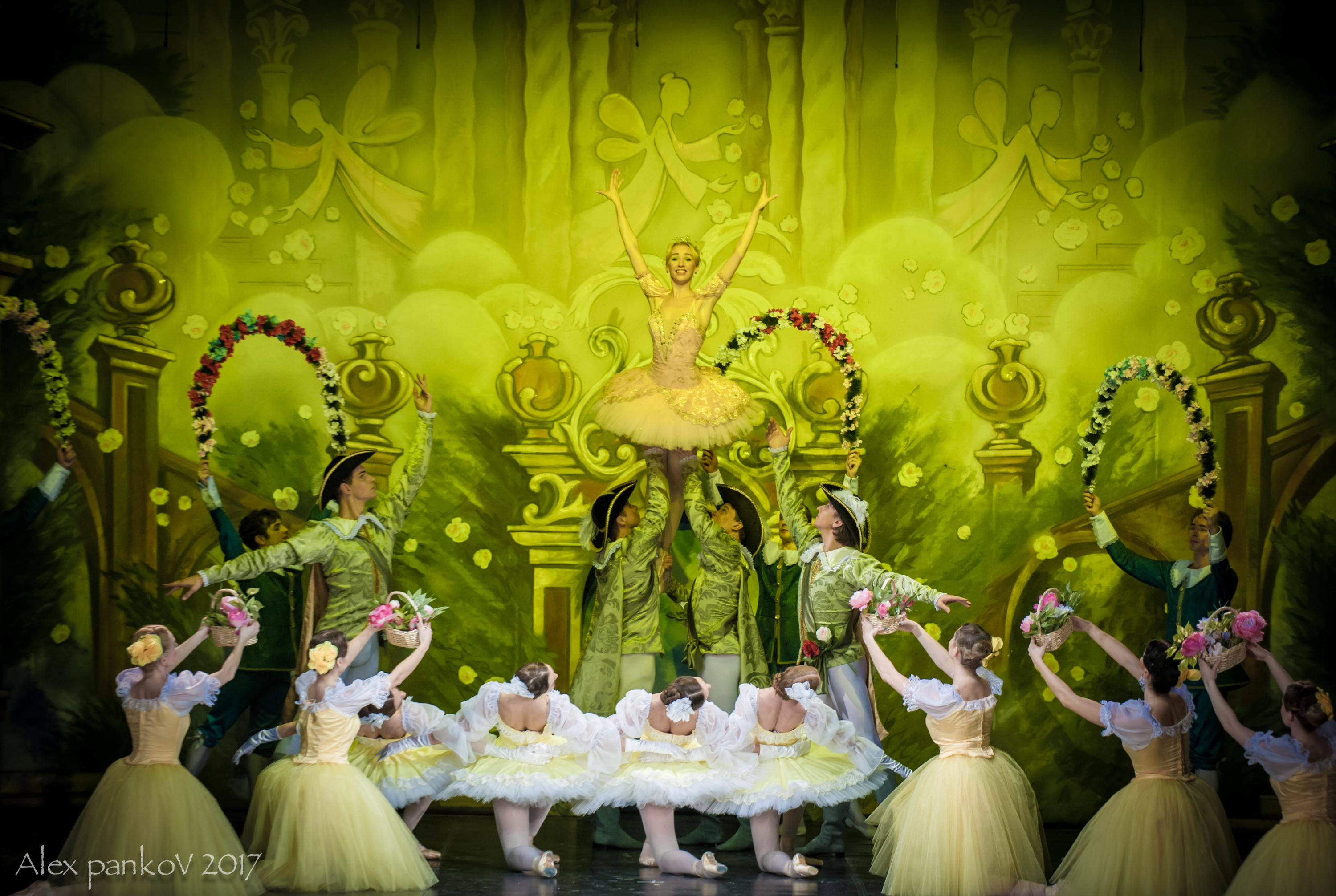 A neighboring kingdom 100 years later. Prince Charming and his lord and lady friends are out for a hunt. The cheerful retinue amuse themselves with dances and games, but the Prince is tired of everyday diversions and stays behind to wander about alone. Suddenly the Lilac Fairy floats in on a boat with gossamer sails. She offers to show the melancholy Prince a vision of Aurora. The Prince is utterly enchanted by the sight of the Princess dancing lyrically and romantically amidst a tableau of fairies and nymphs, bathed in a bluish light. He pursues her but can only hold the Princess in his arms for a moment before she eludes him and disappears. She is after all only a spectral image conjured up by the Lilac Fairy. The Fairy offers to take the Prince across the lake, through the dense and tangled forest, to the castle where the real Princess lies asleep.

The fallen kingdom is guarded by the fairy Carabos. The Lilac Fairy is approached with Prince Desire. Carabos and her retinue try to hide the Aurora from them, but in vain – the prince saw a sleeping beauty. Conyred and enchanted, he gently kisses her – and evil spells are destroyed! Carabosos and his retinue disappear. Aurora awakens, and together with her the kingdom revives. The princess sees her deliverer and falls in love with him. Desiree asks the King and Queen for the hands of their daughter.

Asumptuous hall, graced with statuesque columns and a circular gold staircase crowned by a blue sky. It is here that the Royal wedding of Prince Charming and Princess Aurora will take place. A full series of celebratory divertissements is performed by the inhabitants of fairyland. Puss ‘n Boots with White Cat, Bluebeard and his wife, Goldilocks and a Bear, Little Red Riding Hood and the Wolf – all dance. The celebration then climaxes with the Grand Pas de Deux danced by the Prince and Princess.

All join the bride and groom for a spirited mazurka and the Lilac Fairy, standing in their midst, bestows her blessing on the happy couple.